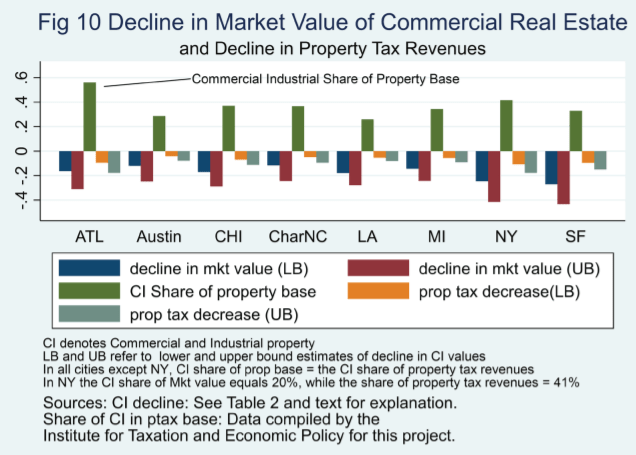 COVID-19 dramatically altered how and where many employees work, a shift that could have a long-term negative effect on commercial real estate occupancy rates and, ultimately, on local governments’ tax revenue base, a new study reveals.

The Impact of Work from Home on Commercial Property Values and the Property Tax in U.S. Cities concludes that even as the recovery strengthens, if trends persist, demand for commercial real estate space could fall by as much as 25%, properties’ assessed values could decline in some places, and city property tax revenue could face a sharp decrease. Researchers from the City University of New York and the University of Illinois Chicago conducted the study to be released today by the Institute on Taxation and Economic Policy.

“The move to working from home for many employers and their professional staff helped businesses remain productive during the lockdown and since,” said lead author Howard Chernick, professor emeritus at City University of New York’s Hunter College. “But this shift will have tangible repercussions for commercial real estate occupancy rates and values, especially as some employers consider a permanent or partial shift to a remote work model.”

“This study should raise concerns for local and state government. Property assessments usually lag. While governments may not yet be experiencing the effects of declining property assessments, they will if current trends persist. Now is the time to implement policies that address this coming challenge,” said co-author David Copeland, adjunct lecturer at Hunter College.

The study examines eight major cities (Atlanta, Austin, Charlotte, Chicago, Los Angeles, Miami, New York and San Francisco). In these cities, commercial real estate accounts for an average of 37% of property taxes, ranging from 26% in Los Angeles to 56% in Atlanta. The researchers used data from the Bureau of Labor Statistics Quarterly Census of Employment and Wages to track employment changes in 2020 by city and industry and to estimate the direct effect of the COVID-19 recession on the demand for commercial space. The report includes a full explanation of the methodology, which includes use of a specially developed comprehensive database on city finance.

Diversified revenue structures, such as income taxes in New York and state aid in San Francisco, provide some insulation from fiscal shock. By contrast, cities in Texas and Florida, where state aid is low and property tax shares are high, will need to reevaluate their fundamental fiscal stance, which is based on no state income taxes, the researchers conclude.

New York City has the most commercial real estate in the country, with Manhattan alone having 11% of all office space in the United States. The researchers found that working from home could lead to a 16% drop in the market value of commercial property in New York City, almost double the decrease from the COVID-19 recession alone.  These estimates dovetail closely with market value estimates from the New York City Department of Finance.

The effect on cities’ budgets will not happen immediately. Generous federal fiscal relief under the American Rescue Plan has given cities a few years of fiscal breathing room to avoid budget cuts, even as they collect lower property taxes. Federal, state and local policymakers should make changes now to prepare for the upcoming challenge.

“Cities and their surrounding areas are key drivers of economic activity,” said David Merriman, a co-author of the report and interim dean of the College of Urban Planning and Public Affairs at UIC. “The pandemic’s effect on working arrangements will have a long-term effect on the fiscal health of local governments.”